Taking stack is a meeting facilitation method that can be employed to strengthen and stabilize discussions and decision-making processes in cooperatives.

The following is a technique used in some democratic workplaces for deliberation, discussion, and decision making. Because of the way our workplaces – and society in general – are structured, most of us have little experience in actually working together cooperatively. Therefore, when learning about self-managed businesses, it is just as important to practice the skills necessary for workplace democracy as it is to learn about the ideas of cooperativism. This technique, informally called “Taking Stack,” will be used in some class discussions and activities, as well as for making major decisions in your fictional cooperative in Co-opoly.

The purpose of taking stack is to facilitate discussion and decision making in which all participants have equal say in a conversation. Otherwise, in a structure-less setting, an individual or a small group of people could easily dominate and shut out other participants. Taking stack is meant to bring balance and a coherent method to the sometimes strenuous and sloppiness of democratic discussion and decisions.

If a participant has a general contribution to make to the discussion, they should raise their hand and the Stack Keeper will put them at the bottom of the stack. General contributions include: responding to or disagreeing with what another participant has said; making a proposal; making a point; expanding on what another person has said; and etc.

If a participant has a “direct response” to something that another group member said, they should make the hand motion shown in the above picture (index fingers out, thumbs up, moving hands up and down in opposite directions). The Stack Keeper allows this participant to state their response before the conversation goes on. A “direct response” is only a correction to something that was incorrectly stated by another participant, an answer to a question that another participant had, or that is so important that it must be said at this moment. A “direct response” is not to be used to respond to a point that someone else just made, to cut in the discussion-line, or to argue against the person who just spoke. Such responses should go in the normal stack line.

Correct Usage: “You asked who volunteered to take over your shift? That was me.” OR “Actually, the store spent $100 dollars yesterday, not $1,000.”
Incorrect Usage: “I disagree with what you just said, because…” 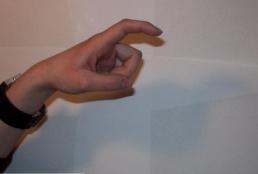 Any participant may make the following hand gesture to indicate a “clarifying question.” If someone is making this gesture, the Stack Keeper allows them to ask their question before stack goes on. This should only be used in situations when a participant does not understand something that is being said, needs additional information, or if they have a question about the factual accuracy of what is being said. This should not be used in anyway as a response to someone else’s statement.

Correct Usage: “Wait, what were our expenses last week?”
Incorrect Usage: “How can you say that when you disagreed with Jeremy’s point?”

Example 1: “I’m not sure why we’re talking about shifts when the agenda says we’re supposed to be talking about salaries.”
Example 2: “There’s a proposal on the table, and I think we should resolve that before we move on to anything else.”

At any formal meeting, it is essential that one member take meeting minutes. Meeting minutes are essentially notes about what happened at the meeting. They should include important points made at the meeting, who was assigned what tasks, and what decisions or conclusions that the group came to. These meeting minutes are to be made available to every member of the cooperative. This is important so that there is transparency in the workplace, so that people can be reminded about what tasks/projects they were assigned, and so that everyone can easily recall what decisions the group made.