Difference between revisions of "Worker Cooperatives"

In traditional worker cooperatives, all shares are held by the worker-owners with no outside or consumer owners.  Like other kinds of cooperatives, worker cooperatives operate on the "one member, one vote" principle: no worker-owner may buy more shares in order to obtain additional decision-making power or financial entitlements.  It is worth noting that some "hybrid" cooperatives exist, in which workers own a considerable number of shares but some "outside" ownership is permitted.

A more detailed primer on worker cooperatives can be found here.  Part one is particularly useful as a basic overview.

Many worker cooperatives promote some degree of democratic self-management.  This means that, in addition to owning a share in the company, the workers participate making operational decisions.  The highest degree of worker self-management exists in collectives, where all workers may become equal co-managers.  However, many hierarchical worker cooperatives empower workers to elect managers or Board Directors, serve the Board or on committees, or vote on certain management decisions.  Different kinds of democratic workplaces are described in more detail in the section on Worker Cooperative Structures below.

In worker cooperatives, each worker owns an equal share of the business.  When a worker joins the cooperative, they invest a set amount of money into the business. This is referred to as a buy-in. This money may be paid all at once or over an extended period of time.

At the end of each year, worker-owners are often paid a portion of what the business makes. In a typical business, this money is referred to as profit.  In a cooperative, it is known as a surplus.  Worker-owners may vote on how to distribute this money. They might choose to divide it up equitably amongst themselves, invest in an expansion or capital improvements, repay debt, use it for worker benefits, and more. Successful cooperatives often do a combination of these things, while making sure to put aside or re-invest a certain percentage of the surplus. Additionally, worker-owners also share the responsibility if the business is doing poorly or losing money.


Some cooperatives use majority-based decision making. This means that at least half plus one of the workers need to agree on something. However, others adhere to a consensus decision-making process. This practice means that everyone has to consent to a proposal before it is adopted.  Alternative decision-making processes include super-majority votes (such as 67%, 75%, or 90%), modified consensus or "consensus minus one," or different processes for different kinds of decisions.  Which decisions are made by all worker-owners, sub-groups of workers, or individuals varies based on the size and structure of the cooperatives.  Additional information about decision-making in worker cooperatives can be found in the hyperlinked articles above, and in Part 3 of the presentation available here.

Some worker cooperatives are managed collectively.  This means that each eligible worker (typically all workers who have successfully completed an intake process) may become an equal co-manager of the business.  In some collectives, particularly smaller ones, every worker performs a similar job and participates in most decisions, even relatively minor operational (day-to-day) decisions.  Most collectives eventually find it more efficient (or more empowering) to delegate specific tasks and decisions to sub-committees, departments, or individual co-managers.  However, major management decisions and governance decisions are generally reserved for full collective meetings, where they are approved by a vote or consensus of all collective members.

Some worker cooperatives have a more hierarchical structure in which operational decision-making authority resides with the manager(s).  However, such cooperatives usually have a mechanism for holding managers accountable to the non-management workers.  Managers are either hired or elected by staff, or the staff elects a Board of Directors (a governing body) which hires and supervises managers.  Again, all worker-owners are typically empowered to vote on changes to the bylaws, which govern the structure of the cooperative. 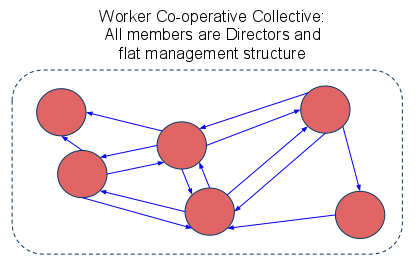 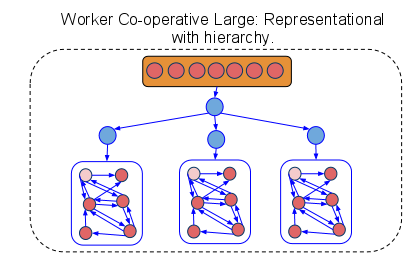 Here are some examples of contemporary worker coops:

The introduction to this article was originally adapted from the Wikipedia page on worker co-ops.